The Broader Importance of the Arlington Streetcar

Can Arlington maintain its enviable success without investment in the Streetcar? 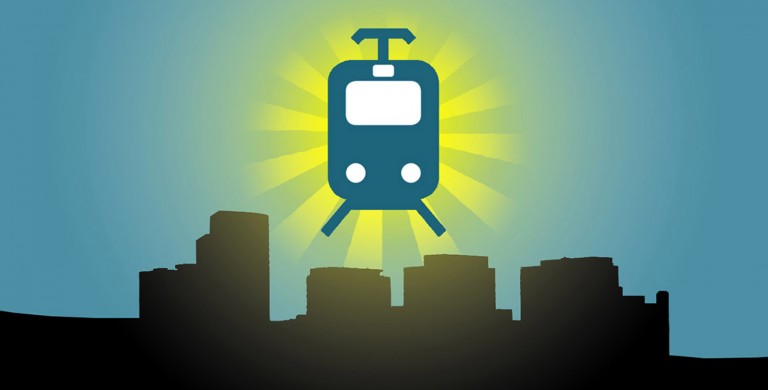 In November, the Arlington County Board voted to abandon its decade-long effort to construct a streetcar line along Columbia Pike. Much of this decision can be attributed to recent controversies surrounding the cost of the project, the mixed-traffic nature of streetcars, and eroding faith in the Board’s ability to manage capital projects. All of these concerns are valid, but I want to add a little historic perspective to this debate.

More is at stake with the decision to kill the streetcar than transportation improvements. The streetcar was an investment in Arlington’s future based on a nationally agreed upon smart-growth formula that Arlington itself perfected.  The county needs to take a collective deep breath, look back on the past four decades of success and understand that the streetcar decision is about the future of Arlington as a whole and not just Columbia Pike.

By the late 1960’s and early 1970’s, suburban auto-oriented development had reached all corners of Arlington. The county’s small size and suburban layout established a cap on the number of possible homes and associated tax base which support communal services like schools, emergency services, the maintenance of extensive new infrastructure built to support suburban housing, and more. Without “cheap” green-field land to rely on for sustained growth, Arlington began to see commercial corridors decline and population stagnate. The suburban model of growth had run its course.

The discussions to build a Metrorail system in the D.C. region offered the county a new path forward for sustainable growth and redevelopment of its declining retail corridors. In what proved to be the most important decision ever made by Arlington County officials, they lobbied to have the new Metrorail line built under the Rosslyn-Ballston corridor instead of in the median of Interstate-66. The county’s “Bull’s Eye” plan for growth around the new Metro stations allowed for increases in density, and therefore an expanded tax base, near the new Metro stations, taking careful precautions not to disturb the low-density residential neighborhoods adjacent to the commercial corridor. The same focused density of development was allowed along the Jefferson Davis corridor running from the Pentagon, south towards Alexandria.

Arlington County’s decision to invest in Transit Oriented Development (T.O.D.) before T.O.D. was even an articulated concept has paid dividends for the county and its residents for roughly 40 years. Despite most land in the county already built-out with single family suburban development, Arlington was able to grow the pool of people and businesses contributing to its financial stability. The success of this experiment is astounding. Arlington now receives roughly 40% of the county’s commercial and residential tax revenue from the Ballston-Rosslyn and Jefferson Davis corridors which only occupy 11% of the county’s land. Arlington set the national standard for successful T.O.D.

In addition to the financial success of Arlington’s T.O.D. experiment, the areas around the Metro stations have developed into lively destinations for the county’s residents. The stations have a mix of dining, entertainment, shopping, office space, and more. The physical environments are walk-able, pedestrian-friendly places where people choose to spend their time. Places like Clarendon have not only become revenue boons for Arlington, but also cultural hubs with a growing sense of soul (in spite of Senator Kirsten Gillibrand’s controversial comments).

Now, Arlington finds itself at a critical juncture in its journey forward. With the two Metro corridors well on their way to full development, where will the county channel inevitable growth in residential demand, and how can that demand be harnessed to create the types of environments that residents desire and have come to love? Over a decade ago, county Board members and planners decided that Columbia Pike was the next logical place to focus growth. The corridor is similar to the Rosslyn-Ballston corridor of the 1960’s: auto-oriented and commercially stagnant. The residential neighborhoods surrounding Columbia Pike have maintained their solid character, but the commercial space along the pike is outdated and in decline.

With Columbia Pike established as the focus of Arlington’s future planning efforts, we find ourselves at the current streetcar controversy. Columbia Pike will never have the density of the Metrorail corridors, which a lot of residents will be happy to hear. What Columbia Pike is envisioned to become is a slim corridor of mixed-use density in the blocks directly next to the Pike, with a rapid decrease in height and density over 2 or 3 blocks transitioning into the surrounding low-density neighborhoods. The current conditions of  parking lots and low rise shops will be replaced with mid-rise mixed-use buildings combining apartments and first floor commercial space. The recently adopted form-based code guiding future development on the Pike should ensure smart increases in density that expand the tax base and diversify the housing stock. A mix of apartments, condos, and homes will allow people of varying age, income, and family size to coexist in a single community, and affords residents the flexibility to change housing types based on their current needs without leaving the neighborhood.

The key to fostering smart growth along Columbia Pike is the T.O.D. model that Arlington perfected over the past 40 years. Ten years of planning studies determined that the streetcar is the preferred alternative.  Metrorail is not an option, just ask WMATA. Dedicated lanes for light rail or bus rapid transit (BRT) are also not an option. There simply isn’t enough width on the corridor to construct additional dedicated lanes. The existing bus service is way beyond capacity and Arlington transportation planners have argued that they cannot improve the service any further. A streetcar line is the best and only option for improved transit along the Pike.

The streetcar would provide increased rider capacity over buses, as well as the signature investment in T.O.D. that would encourage the type of sensible, people oriented development Arlington wants on the corridor. With the Board’s decision to abandon the streetcar, the county has abandoned the model of smart growth that it perfected, the same model that made it a shining example of progress cited by towns, counties, and cities all across the country. The county Board has rejected an opportunity to invest in the future of Columbia Pike, which would have benefited local residents on the corridor and the entire county. There is no telling whether existing development pressure will transform Columbia Pike on its own. However, inevitable growth and redevelopment cannot be taken for granted.

What made the Rosslyn-Ballston and Jefferson-Davis corridors so successful was the initial investment in transit. Without a similar commitment to Columbia Pike, the corridor may remain auto-oriented and outdated, while the smart growth that has sustained Arlington over the past 40 years shifts elsewhere. Arlington made a bold decision in the 1970’s with Metro. That decision paid dividends for decades. Now, with plans for Columbia Pike back on the drawing Board, Arlington is faced with an equally bold decision: embrace and replicate what has made Arlington so successful or reject it and hope everything works out.